1. Memorial Day is a day of remembrance but it also signifies the “Official” start of summer. What are your plans this weekend?

It will start on Thursday when the Hubbies best friend makes his annual trek to the north for the weekend. Sunday will be the first of 3 Parades for the weekend, then Monday will be 2 parades and our annual Meat-a-Palooza celebration (and yes this is the Official Name for our Memorial Day party).
2. What is your most and least favorite thing about summer?

Meat, Meat and more Meat. Fire up the smoker and the grill.
4. What is your favorite summer food?

Well I have to start with the spread we put out for Meat-a-Palooza. Smoked Brisket, Pulled Pork, Smoked Beans, and the Quinoa Salad and Coleslaw that I make. Next would be home made Ice Cream Sandwiches.
5. Are you is swim suit shape yet?

Is anyone *EVER really in swimsuit shape. I am happy with my body and will be seen in my swimsuit as much as possible. Although the pool is in our back yard I’m not really sure who will see me.
6. Given the choice, which do you prefer: ocean, lake or pool?

Pool, then Lake – specifically our friends lake house in NY. The ocean is usually only an option when on a cruise, I don’t swim in Long Island Sound.
7. Which summer blockbuster movie are you most looking forward to seeing?

Eh, I can give or take any of them, there isn’t really a must see movie on  my list.
8. Summer reading: What? Recommendations?

Well I do have 2 books I purchased back in February that I haven’t started yet that came highly recommended – The Something Like Series by Jay Bell (Summer, Winter, Autumn, Spring).
9. Vacation Plans? If you can’t, what would you do if you could?

So far the summer travel plans are shaping up nicely, Long weekend in June with the Drum Corps, Grapehounds Wine Tour weekend in July, and hopefully a Cruise in August.
10. Did you ever have to go to summer school?

Not ever, unless you count Drivers Ed which I took in the Summer prior to my Senior year of High School.

BONUS
Sex on the beach? The Drink Yes! The act Not so much – too much sand.

So this weekend was jam packed full of fun and frivolity. A good way to start off the summer if there ever was one.

The Hubby and I finally got moving on some new plants and vegetables for the Garden so things look spiffy for Meat-A-Palooza next week. But in the meantime we did manage to have some fun along the way.

This weekend actually started back in January when friends of ours posted on facebook about this group called Well Strung billed as an all male string quartet who features classical musicians putting their own spin on the music of Mozart, Vivaldi, Rihanna, Adele, Lady Gaga and more. I looked at the Hubby and said what the hell, they are coming to us locally, literally down the street so I popped online and bought the 2 seats next to our friends, in the front row. This quickly spiraled into 2 more couples, who are friends of ours, buying out the rest of the front row.

About a week before the show I sent out some emails about gathering for dinner prior to the show, so 6 of us met for a nice dinner before heading to the show. Oh I forgot to mention that we opted for the VIP seats which included a post show Meet and Mingle. Seeing as we were in the front I took advantage of it and took some pics (no flash so as not to distract them) which I have posted below.

The Edge of Glory as sung by Edmund. And a good look at Chris’ arms.

This is Dan Shevlin (Dshevy on twitter) he plays the Cello, isn’t he Dreamy?

This is Christopher Marchant (chrisjmarchant on twitter) he plays the violin.

The show was amazing and I highly recommend that if they are coming to a performance space near you, RUN don’t walk to get tickets.

Sunday we had to pull double duty on the fun and excitement. First up was our End of Season picnic for the bowling league. We signed up to bring Pulled Pork (which we put in the smoker after the Well Strung show). There was not a drop left of the Hubbys’ delicious meat. No big prizes for us, I got another Pin for a 200 game, 0ne perfect attendance, a medal for a 60+ point game over my average, and a pin as a token for being on the Board of Officers.

We had a good time mingling with everyone,  some of which we won’t see again until bowling starts in January, and some we see more often and some in between.

From there we jumped on the highway and drove off into New York City. Our first stop was a bite to eat at Havana Central Restaurant. Picking a restaurant in the touristy area of Broadway/Times Square can be very hit or miss. This one was a hit, the ambience was great, although a bit loud, and the food was delicious. 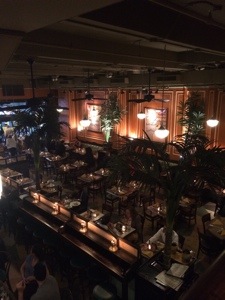 Our view from the Upstairs section 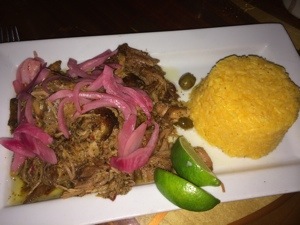 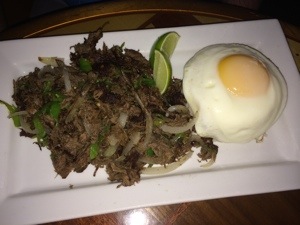 The Hubby, the best dinner date in the world, and NO those aren’t both his 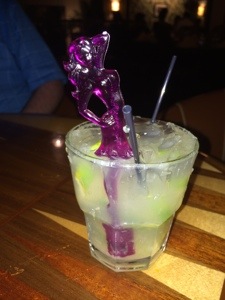 Excuse me sir there is a lady in my drink

– Caipirinha is Brazil’s national cocktail, made with cachaça, sugar and lime. Cachaça is made from the fermentation of sugarcane.

The main reason for the trip into the city was to see Neil Patrick Harris in Hedwig and the Angry Inch.

Sneaky pic of the stage from our Balcony Seats. No not the best in the house but they were inexpensive and still allowed us to see NPH!

There are not enough synonyms for the word Amazing, Fantastic, Outstanding, Astonishing, Astounding, Stunning, Breathtaking…..you get the picture, to describe this show.

I didn’t really know very much about the show prior to getting the tickets, but it came highly recommended from friends of ours whom I trust completely when it comes to things like this. The set was minimalist, as you can see by the pic, there were a c0uple walls that moved in addition. The cast was small, NPH, a lead woman (whom we saw in Kinky Boots) and then the 4 people that made up the Band.

Neil Patrick Harris is well deserved of the Tony Nomination he has for this show. He was so full of energy and can sing like no one’s business. The Costumes were gorgeous, and the costume changes handled with flair. I don’t want to spoil anything for anyone who may have tickets or the desire to see this show, so I will just say I was in awe all night and tell you to go if you have the chance.

Now that this is out of the way, the next thing we are concentrating on is Meat-a-Palooza on Memorial Day, along with 3 parades I have this weekend. These are the official kickoff to Parade Season, and then later this summer is Grapehounds, hopefully a cruise, then 2 weddings in September. It’s going to be a bumpy ride.

And the final week has come. It’s been a great season.

My average is  158 which keeps me at the 4th highest average for men for the season.

This week we played Team Alley of the Dolls who were in 8th place they in turn finished in 5th place.

We took  o points for the week having us finish the season in 9th place.

The team who took first place Up Your Alley, was a new team to the league this year. The Hubby and I convinced them to join and I am very happy for them.

Well here are at the home stretch.

This week we played Team Scared Straights we even had the pleasure of one of their girlfriends visiting and bringing cookies.

We took  o points for the week, pushing into 7th place.

Next week is the final week which means position round. We play against the 8th place Team Alley of the Dolls. The best we could hope for is a 3rd place finish as the 1st an 2nd place teams have a commanding lead over everyone else.