Christmas has come and gone in what seems like a blink of an eye.

Christmas Eve both the hubby and I had to work, though it seemed as if at times we were the only ones working. I believe my company was the only one in the building working on Monday as I was able to get a parking spot close to the building. I can say it was nice to not see as much traffic as usual. As the hours ticked by, slowly at that, it seemed like we would be trapped there until 5pm. Thankfully at around 1:15 the VP of sales finally came around and said that the office was indeed closing at 2:30. It was a good thing too because I had zero emails from customers.

After work we had a bit of time at home before we packed up the wine and the cheesecake I made and headed over to my older brothers house for the Christmas Eve festivities with my Dad’s side of the extended family. The hubby and I opted out of being included in the Pick a name gift exchange. We were there for the food, and the fun, oh and the wine and the Hubbies home made eggnog. Just before we were getting ready to leave it started to snow so although we had a white Christmas it wasn’t a very heavy accumulation. As you can see by the picture below the Classiness just comes out when the whole family is together. That or proof that my brother isn’t a wine drinker and only owned 1 corkscrew.

The best gift of the night went to my mother, from my cousin. A Calendar with a bunch of old and newer pics.

This is me circa who knows when 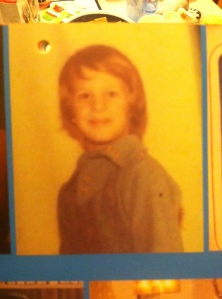 This picture has to be right up there around 13-14 years old. The hubby is on the left, I am on the right and my Youngest Uncle is in the middle.

Christmas morning arrived and with it was the beginning of another fun filled crazy day. We had some last minute dinner prep to do in the morning before we had breakfast and opened our presents. The Hubby got some new Doctor Who paraphenalia – a Tardis Laplander Hat, a Calendar, and a Dalek Ornament. I got a silicone bite size brownie pan, a bag of Chili Paste to make Kimchi with, and the best gift ever a 4 pack of Copper Moscow Mule Mugs and Ginger Beer. The Moscow Mule has become my new favorite drink.

The hubby and I for the Christmas meal have elected to be in charge of the prime rib. You can see it cooking on the left. The hubby dry aged the beef for a month. On the right you will see the fryer going for the turkey.

Dinner was wonderful, the best part being that it wasn’t at our house so the clean up was minimal. My youngest brother and his wife who also just bought a house this year offered to host the holiday. There were 18 of us in total which included all of my siblings and their respective spouses and kids, my parents, an uncle, a cousin, and my grandmother. While the hubby was in charge of the meat, I offered to bring dessert, upon my brothers request for Bread Pudding. I also made his wife a gluten free carrot cake, which I must say was delicious.

The second best gift of the holiday (not including any I received) was the fabulous sparkly skirt we gave the Niece. She has been all about the dress up lately, and the minute she opened it she wanted to put it on. She HAD to take off the outfit she was wearing and then put the skirt on so it was shirtless skirt wearing for a while. My Mom was finally able to get her to put her pajamas on, but she also had to put the skirt back on too. 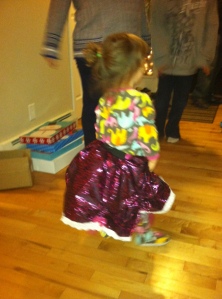 So that was Christmas in a nutshell, now on to New Years!

2 thoughts on “So that was Christmas”